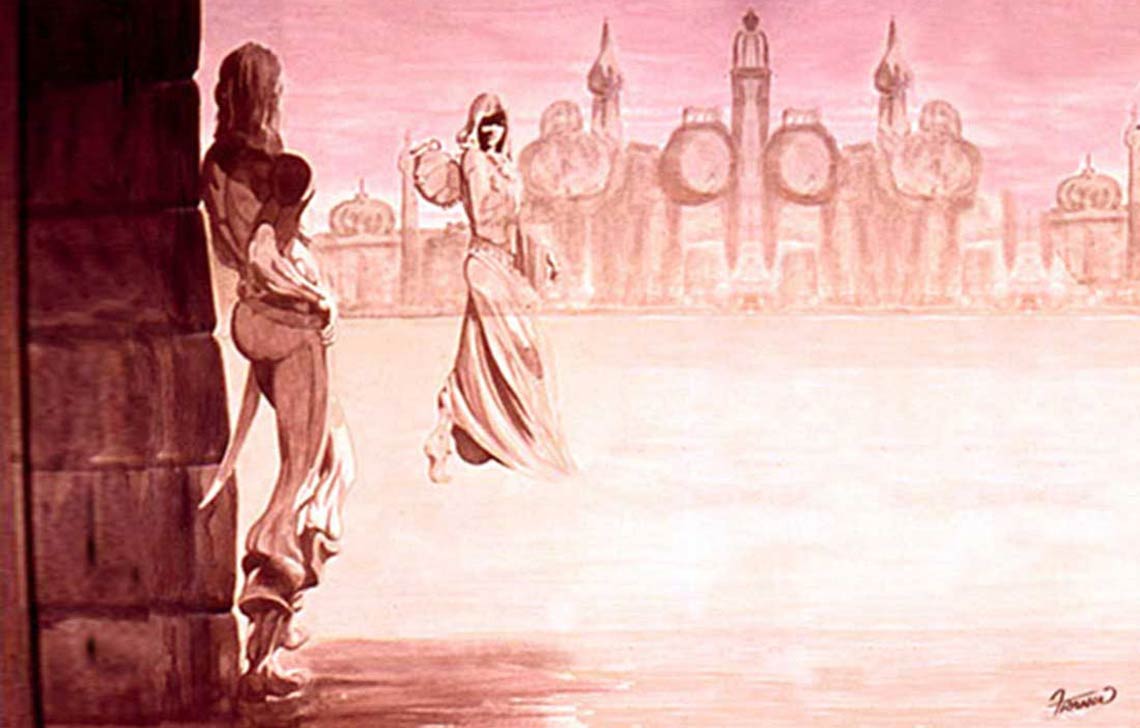 “Djelem Djelem" - 'I Am Travelling' by the Barcelona Gipsy Klezmer Orchestra. Vocals: Margherita Abita. Opening 'atmospherics' by Franco.
Above: The Soldier and The Water-Bearer. 1977.
A water-colour I did, of a dream I had had the night before. Some time in 1977 - and the accompanying story I wrote.

I had leapt out of bed. And without bothering to wash my face or brush my hair. Or even make coffee - I rushed to my studio.
To render this while it was still fresh in my Minds Eye. And write this account.

The opening bars of this song (which are too long to include here), reminded Donna of 'her' Egypt that she so loved.
One of the songs Donna would love to play on a Sunday morning...

I have provided a YouTube link at the end of the page for those who might wish to hear the song from its beginning.

The Water-Bearer. My Prescient Vision of Donna Darkwolf Scheherazade

I am a soldier in a foreign land.
I am standing in a shaded arch, watching this girl drift gracefully by – she was almost a mirage. I was so lost in reverie…
She notices me – And without breaking her stride – drifts directly toward me.

“I am a Water-Bearer. I carry water for the soldiers. You are Soldier. Will you drink?”,  she asks imperiously.

I am so astonished – I stumbled for words – because she giggled… turning her eyes shyly away.
Embarrassed by my own loss of composure in the presence of her effortless grace – I ask her for her name.

“I am called Scheherazade. Will you drink?”,  said almost girlishly.

She pours out water in her brass cup.
As I drink she says: “I am of the Viyi.  We collect the Fallen from the battle-field.
Perhaps I will chance upon you. What is your name so that I might write it on your marker?”

“Za-Če”,  she repeats.
“Good. I will be sure and remember you. You do not look like the dying type,
But in battle –
There is no certainty until after the battle is over”.

She firmly snatches her brass cup from my hand.

“If I do not find YOU on the field – be sure to FIND ME! It will not be difficult!
There is only ONE Scheherazade!”

Having spoken, she turns abruptly on her heel.
I watch the hypnotic sway of her hips – thinking to myself:
“God’s protect me so that I might find out this beautiful Scheherazade again!
Even for just one day.”

The Reason for Including this Story
Elsewhere on this book you will have read how Donna Darkwolf and I met.
She had said: 'Aahh! You found me!'
As if I was expecting to - by some pre-arranged agreement.
My astonished response, when I turned and saw her face was:
"Migod! It's YOU!"
Which set her off into peals of laughter, and was a source of her merriment for years to come...

"I wish you could have seen the LOOK On Your Face!"

Before Donna Darkwolf departed for The Undiscovered Country, she wrote to me:
"Find me on star Sirius! It will not be difficult. There is only ONE Darkwolf!
You are Soldier!
I should not evade your scrutiny!
Get Tiny! Focus!
The WOLF could be right behind you!
And YOU may be In Bocca al Lupo - all over again!

Are you Not LUCKY?!
Every Trainee gets an Angel!
You've got ME!
Again!

Donna - On the Cusp of Aquarius and Pisces

Having lived with Donna Darkwolf all these years, I have seen what she is capable of achieving, her power over people.
her ability to articulate her words –spoken and written.

Donna Darkwolf was born on the Cusp of Aquarius and Pisces. Aquarius is the water bearer.
Aquarius represents the gift of truth and pure intention that they bring into the world.

I have witnessed her transform from meditative withdrawal to energising and exciting those around her at a festival.

Watched her in quiet personal consultation – and in penetrating, thought-provoking public discourse.

I delighted in observing her cheerful, witty conversation with other people at a party, and was ethralled by her solemn and powerful invocations at Pagan rituals and ceremonies.

But most of all I enjoyed our conversations which ran the whole gamut of emotions.

The line drawing on the right is one of a series of the 12 Signs of the Zodiac, which did - and had printed as posters to sell in my then-wife's gift shop.
The sold quite well.

I never imagined that one day I would be married to a woman born on the cusp of the two Water Signs: Aquarius and Pisces. 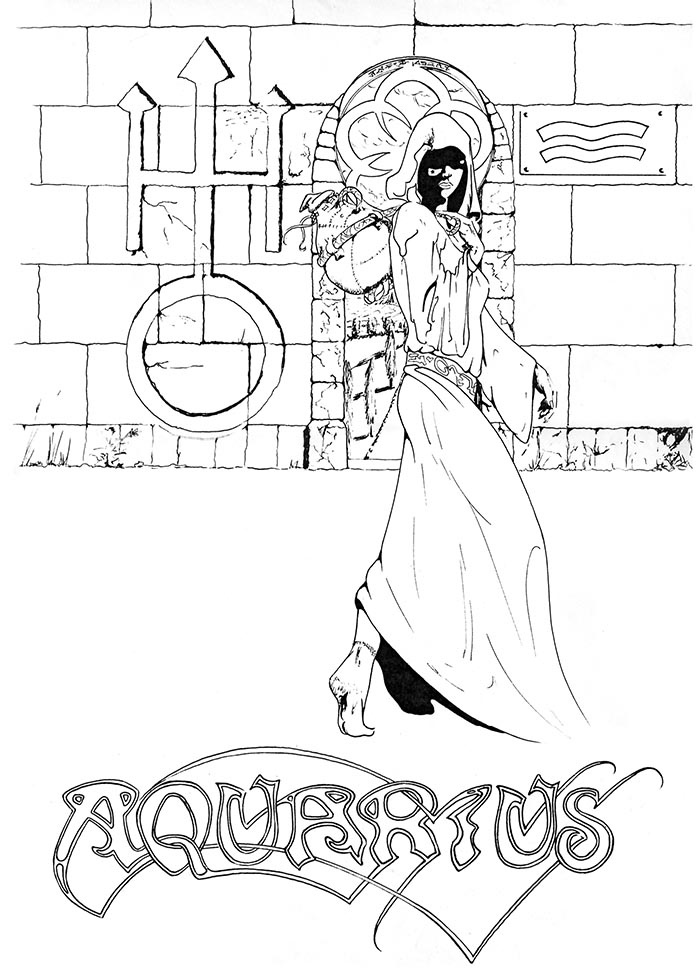 Try... Walk This Off! The star SIRIUS, is tattooed on her cheek...

Donna - Always in Love with the Ocean…

Aquarians are very forthright people. They do not mince words. They will put you on a short leash. No two ways about it.
Some people find Aquarians aloof or cold. This is not true. They merely keep their emotions in check.

As Donna Darkwolf was wont to remark to the occasional person on a few occasions:
“I am not HIDING anything from you! I just have NOTHING I wish to SHARE with you!”

Donna’s Dream of The Mermaid…

Pisces are born between February 20th-March 20th and are ruled by Neptune (psychic, esoteric mystery) and Jupiter (abundance).
So, Pisceans are at once magickal and worldly, secretive and expansive, soulful and joyful.

Pisceans are “Old Souls”.  Worldly wise - and possessing enormous depths of compassion and empathy for others.

The Pisceans symbol of two fish facing in opposing directions, reflects the duality of their continual inner struggle.

On the one hand, Pisces is driven to be successful, busy and active – which Donna Darkwolf often was.
A whirlwind of administrative duties, lecture and lesson preparations, leading Pagan celebrations, annual rituals and hand-fastenings

The other Pisces needs to withdraw from the World. Pisces just wants to pull the covers over their head and stay in bed.
Life is hard for Pisces; they are extremely sensitive to ALL the vibes around them.

And I have witnessed Donna Darkwolf lay in bed for days at a time – waking only to kiss me ‘hello’ or ‘good-bye’ or ‘good night’.

And then one morning – BINGO! Here she is. Bright. Sparkling. Refreshed!
My Beautiful, Shiny Wife.

Donna's affinity for the Ocean, and her fascination for the underlying theme of the story, "The Little Mermaid", by Hans Christian Andersen, conspired to alter Donna in some subtle way - as she learned the truth of The Little Mermaid.
A young mermaid who is willing to give up her life in the sea as a mermaid, in order to gain a human soul. And she wants to marry a prince. But she ends up dying in order to save his life.
It is a tragic story. The ending has been subverted by Walt Disney in order to create a saleable product.

The Little Mermaid offers some insight to the Donna Darkwolf - who discovered the real tragedy when she was about twelve years old. 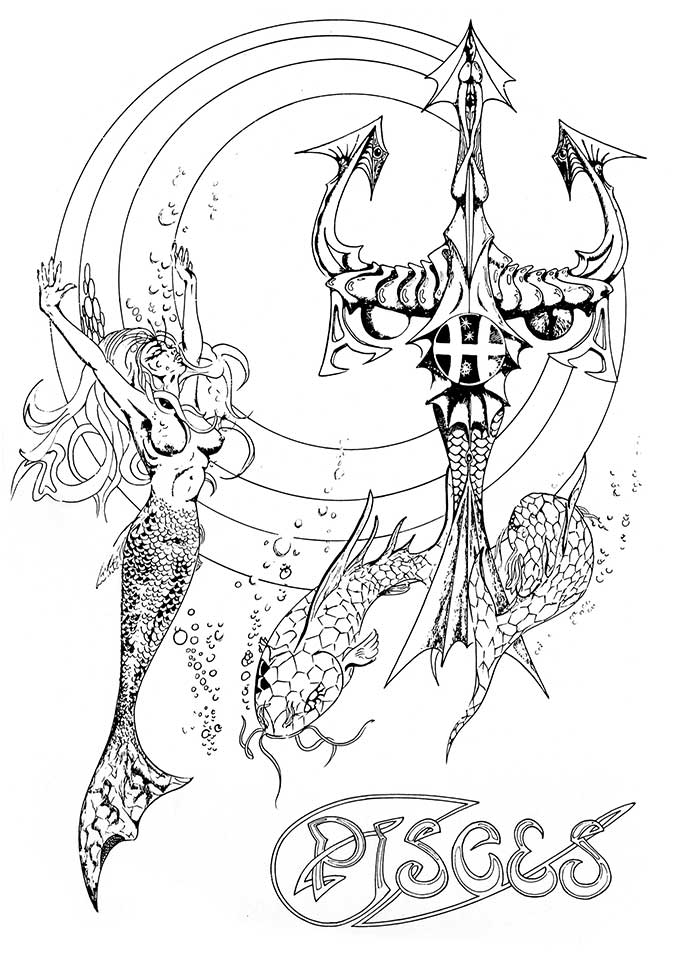 Pisces is just two fish. Fish Are NOT SEXY.
Hence the inclusion of the mermaid. 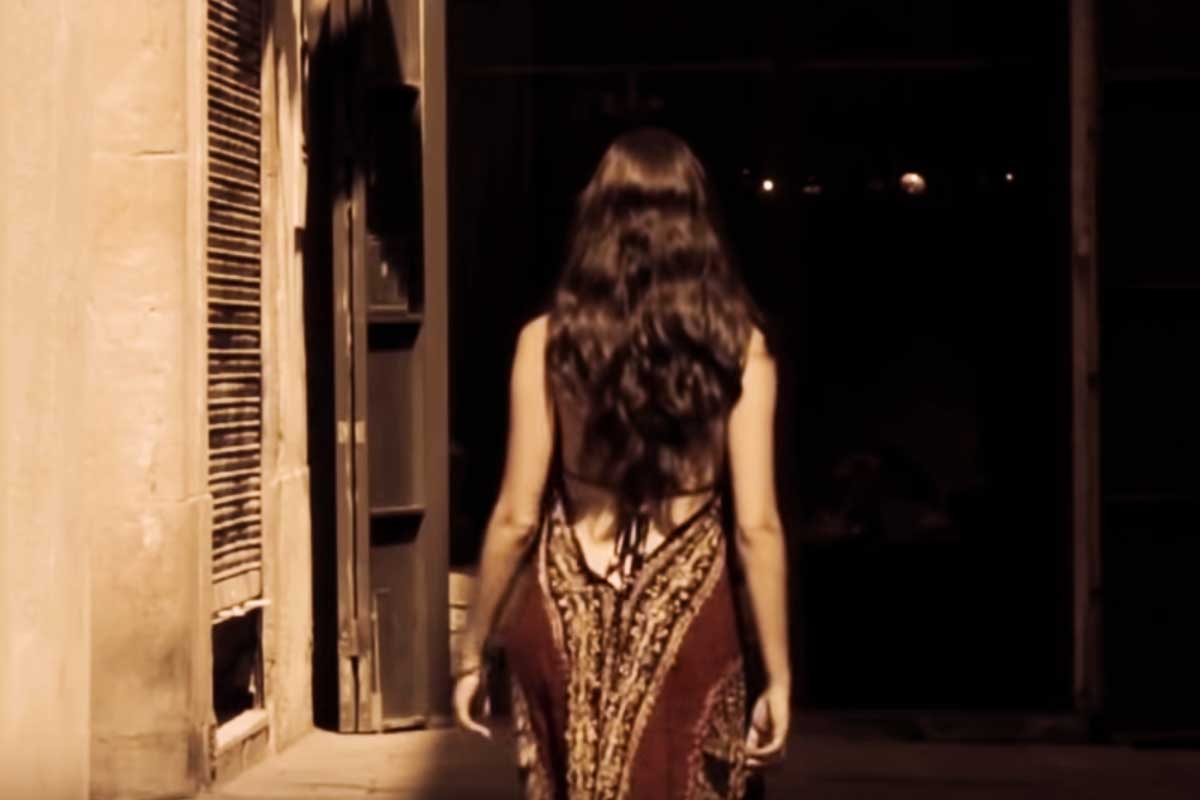