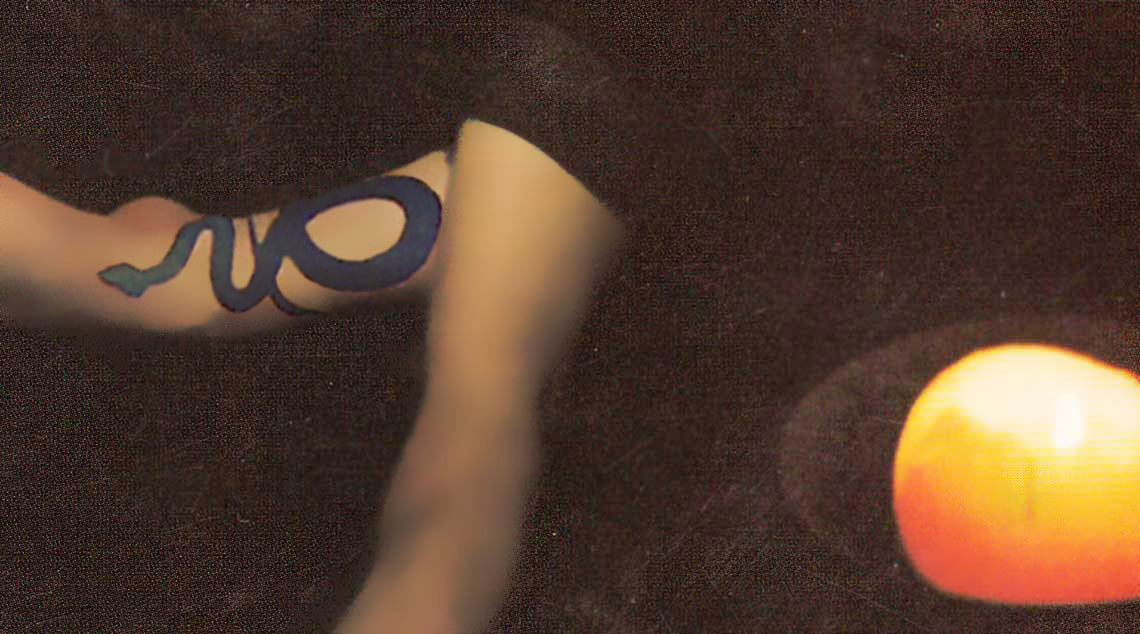 "Song of The Blue Serpent". From Donna's collection of meditative music, that she would retreat into.

Quetzalcoatl, "The Precious Serpent", is the Aztec god of Wind, Air, and LEARNING.
The symbol of the goddess Wadjet, an ancient protective deity of Lower Egypt.

In many cultures, serpents symbolized the umbilical cord, joining all humans to Mother Earth.
The Great Goddess often had serpents as her familiars — sometimes twining around her sacred staff.
As in ancient Crete — and the serpents were worshiped as guardians of her mysteries of birth and regeneration.

Donna Darkwolf's Serpent. History Symbol of the Snake in Mythology

Squeals of laughter as I bend to lift Donna's ankle to my lips, and kiss her Divine Serpent Tattoo.
At a PARTY!
"My Franco! No one has EVER kissed my Serpent! Sooo funny!
How brave. If you were not my beautiful Soldier... I should have struck you.
Not that I would succeed. I have seen your reaction time.

Donna explained her Blue Serpent to me"
Quetzalcoatl. Aztec god of LEARNING. Caduceus of Mercury, The Messenger of the Gods
The beginning of christianity portrayed the serpent as leading Eve to take and eat an apple from the Tree of Wisdom. Thus getting herself and Adam banished from Eden, and the serpent to be forever cursed.

So much for christianity in HIJACKING a symbol used in Hundreds of religions, in a POLITICAL move designed to separate christian from the multiplicity of faiths, thousands of years older than christianity.

Prior to the advent of civilisation, the snake is represented in rock art paintings in Africa and North America.

Christianity came into being, long after Jesus Christ had died.
Prior to the event of christianity, the Serpent is carved into the stone heiroglyphs all over ancient Egypt, and worn as adornment by pharoahs and queens.

The Uraeus is an ancient Egyptian symbol of a reared snake, a Cobra. It is found throughout Egyptian art, but the Uraeus is, most notably, attached to the front of pharaohs' crowns.

The snake in this form was a symbol of the goddess Wadjet, an ancient protective deity of Lower Egypt.

Carved out of stone all over India. Celebrated in China in the form of the Dragon.
The Snake, a symbol of auspice and honor in China. Ancient Chinese believed the snake could prolong life, and considered it to be a symbol of good luck, great harvest, and reproduction.
Snake-themed cultural relics are often found in southwestern and southern China
Snakes were sacred to the Aztecs as they were the symbol of the feathered serpent god, Quetzalcoatl.

Quetzalcoatl, meaning "Precious Serpent",  is the Aztec god of wind, air, and LEARNING. Before Jesus Christ was a sperm cell.

Quetzalcoatl was related to the planet Venus, the dawn, merchants and of arts, crafts and knowledge.
He was also the patron god of the Aztec priesthood, of learning and knowledge.

The serpent, or snake, is one of the oldest and most widespread mythological symbols.
The word is derived from Latin "serpens", a crawling animal or snake. Snakes have been associated with some of the oldest rituals known to mankind and represent dual expression of good and evil.

In some cultures, snakes are fertility symbols. For example, the Hopi people of North America performed an annual snake dance to celebrate the union of Snake Youth (a Sky spirit) and Snake Girl (an Underworld spirit) and to renew the fertility of Nature.

During the dance, live snakes are handled, and at the end of the dance the snakes are released into the fields to guarantee good crops.
(The Snakes eat the rats and mice and other things, attacking the crops).

"The snake dance is a prayer to the spirits of the clouds, the thunder and the lightning, that the rain may fall on the growing crops."

In other cultures, serpents symbolized the umbilical cord, joining all humans to Mother Earth.
The Great Goddess often had serpents as her familiars — sometimes twining around her sacred staff, as in ancient Crete — and they were worshiped as guardians of her mysteries of birth and regeneration.

“There’s a reptile in the totem system, Scheherazade”

by Donna Darkwolf
Find it... it is residing at the base of the operational program.
The Serpent has lived all these thousands of years in a special relationship with women (like you my lovely, like your hair? i write) - a dark world consciousness.
(Like your skin so light it blazes. I write)
Unable to function as a symbol because of its unpredictability, it produces a certain type of madness.
Only in women.

In men it prompts art or violence. So it is a madness that men do not understand.
And women cannot control. Unless they have learned to harness it  - which takes understanding and training.

I have spent a one thousand nights and one night, communing in this madness without communicating.
I do not pretend to understand.
But do know I am wiser and closer. I wrote all of this in my book, based on my knowledge of the Snake's Ballet.
You belong to my Heart. We gatherered stars and a million guitars.

Yet we are all slaves to The Snake.
A snake makes no sound. But you can hear it coming. Each individual hears the Snake in their own way.
Women are especially attuned to snakes. They have to be.
It will ALWAYS be their choice which Snake the Minister's daughter will ride.

The Corruptness of the Christian Religion, As Advertised

Only your Roman Christian up-bringing from a corrupt church will make you think that you must believe the snake led you astray.
Well maybe it did. You want to mount up on the sssnake each night. All girlsss want to go there.

They cannot resissst the call of the sssnake. The explanation of fassshion, TV, and risssing pregnancy.
Sssociety just has been too complacsssent to realize that SSSOCIALLY, we are SSSTILL where we were when Ancient Egypt reigned supreme.

Victorian England, leave it to beaver TV, white picket fence open toed shoes led you to believe that we were / are civilized. For your lifetime that you grew up in!!!

What was happening before that?

If you are a silly little person who is reviled by snakes you have to consider that Snakes are in all Egyptian heiroglyphy for a reason.
Snakes are revered in fertility rites, snakes bring summer, snakes appear in the calendars birth sign,
Snakes have names like Ourobouros. Eating his own tail to regenerate and build the infinite circle of the Cosmos.

Well, sadly you are also a slave to organized religion.
First: animals cannot communicate with humans with words.

Second: a snake would not know that biting into an apple will confer widom to a human

Third: we have been eating apples for thousands of years - yet very few people posses "wisdom".

Finally: does reading these three statements not make the Garden of Eden a bit of a logical fiasco?

Do you not feel CHEATED?

All the distortion of Genesis and the Garden of Eden is a fabrication concocted by barely civilized plebs, when Egypt was already a great civilization, with such amenities as running water and toilets, war chariots and a standing army, a system of government, accountants and public taxation.

Symbolic Values are Frequently Assigned to Snakes or Serpents

Fertility and Rebirth
Historically, serpents and snakes represent fertility or a creative life force. As snakes shed their skin through sloughing, they are symbols of rebirth, transformation, immortality, and healing.The Worm Ouroboros, in a circle, eating its own tail, is a symbol of eternity and continual renewal of life.

Guardianship
Meditating Buddha was shielded from a storm by a Cobra, the Naga Mucalinda.

Serpents are represented as potent guardians of temples and other sacred spaces. This connection may be grounded in the observation that when threatened, some snakes (such as rattlesnakes or cobras) frequently hold and defend their ground, first resorting to threatening display and then fighting, rather than retreat.

Thus, they are natural guardians of treasures or sacred sites which cannot easily be moved out of harm's way.

And TODAY!  The Caduceus which you see at hospitals, and on the sides of ambulances, is the staff carried by Hermes in Greek mythology and consequently by Hermes Trismegistus in Greco-Egyptian mythology.

Mercury is the ONLY metal that exists in liquid form.

The same staff was also borne by heralds (royal messengers) in general, for example by Iris, the messenger of Hera.

It is a short staff entwined by two serpents, sometimes surmounted by wings.

To prevent robot spam, there is no link
design@franco.co.za